Welcome to my Den of Dorkdom. If you're here, it likely means we have some interests in common. If not, you're either lost or a robot.

Anyway, I have recently learned about a game called Frostgrave. I haven't played a game yet, but I am assembling a war band. The premise of the game is that a city was cast into a 1,000 year-long blizzard as a result of a magical accident and was abandoned. Now that the blizzard is over, various magic users are hiring henchmen and making their way back to the city to discover the lost treasures and magical items left behind.

I ordered the book and was waiting for it to arrive when I read an article on a Frostgrave Facebook page. I was inspired and immediately made my way to the local hardware store. I purchased 6mm (1/4") thick MDF, 25mm (1") thick rigid board insulation, felt furniture pads, and some dowel. My lovely wife was at Ikea later on and came home with the small dowels for me to use (more on that later).

I pulled out my utility knife and went to work cutting the styrofoam into matching squares to be glued onto the MDF. I measured the foam and drew cut-lines with a ballpoint pen and went to work. Once, I was finished, I had the brilliant idea of using a chalk line to mark the cut lines. I figure that would have been much quicker and simpler. Oh well, too late smart. I then used every last bit of glue we had in the house to secure the foam panels to the smooth side of the MDF tiles. 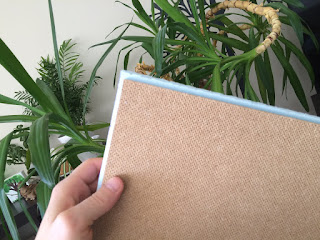 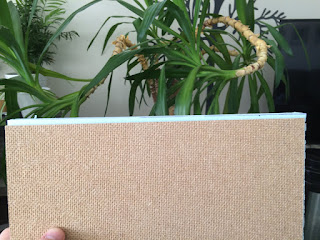 As you can see, my foam-cutting didn't always line up with the pre-cut MDF. I grabbed a square and a pen to mark out the edges of the MDF. I then clamped a metal ruler on the foam side of the assembly. My intent was to use the metal ruler and the edge of the MDF as straight edge to guide my foam cutter. 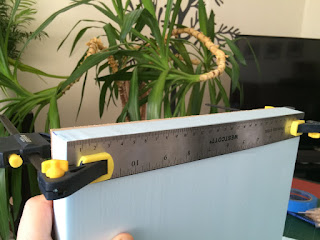 The photo below shows the end result. Some gaps, but all-in-all not too bad.
The next step was to get the tiles ready for painting. Using a variety of instruments, including ballpoint pens, some of my wife's embossing tools for her card-making hobby, and balls of aluminum foil, to mark up the foam. The first nine tiles I made are fairly vanilla. The next batch will have some more variety to them. I divided the tiles into 25mm (1") grids and spent a few hours in front of the TV tracing a faux-stone pattern into the foam (as mentioned in the article above, it is best to trace the squares individually, so they look separate and more natural, rather than drawn as a grid). I added a variety of cracks and blemishes to the stone to show wear and tear. Stealing techniques from the "Glue in the Carpet" link above, I began rolling balls of aluminum foil all over the foam tiles. What the author fails to describe is the amount of effort you need to put into getting the texture imprinted into the foam. My delicate, office-worker hands were bruised and sore for a couple days afterward. Anyway, here's what the tiles ended up looking like after they were textured:
Being a somewhat experience game player, I know that game boards tend to get bumped around during a game, especially when things get exciting. I wanted to develop a system to try to restrain the movement of the tiles while in use. Here's where the Ikea dowels come in. I drilled holes in the side of the foam. When setting up the tiles, the plan is to insert the dowels into the corresponding holes so that, in the event of inevitable bumping, the tiles will remain reasonably aligned. As stated in Murphy's Laws of Combat, a plan is only good until you first encounter the enemy (excited or clumsy gamers)
Finally, we get the the paint! All painting for this project was through my airbrushes. I started with Vallejo Grey Primer and sprayed it, un-diluted, with one of my airbrushes.
I then pre-shaded the lines, cracks, and details with Vallejo Black Primer again un-diluted. This is a technique I learned for scale model building. Fortunately, you don't need to be particularly neat during this stage. I also painted the edges of the foam black using the primer.
Next, I began to paint the tiles. Using P3 Ironhull Grey, I began lightly spraying over the pre-shading. The plan was to gradually build the paint in layers over the pre-shading, allowing the colour variation to show through.
Finally, I went over the Ironhull Grey with P3 Frostbite.
Once the paint was dry, it was time to finish the board.  I gently scrubbed the backs of the boards to loosen any fibres that were caught on the textured side of the MDF and attached  felt pads to the backs of the boards. I often play games at the kitchen table and I've grown fond of my wife. Scraping the table would not bode well for me.
And, at long last, the finished project. As you can see, there's variation between the panels. I think they will look okay, especially after we get some terrain built and covering the board. 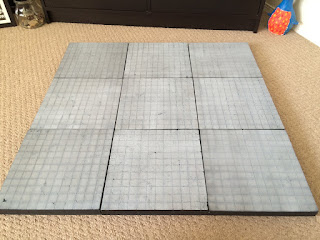 If you've made it this far, I thank you. I had some fun building this board and I look forward to being able to use it in-game. I need to get my war band painted so I can actually play the game. Please leave comments or questions below.